Looking for a unique holiday this year? You need to discover the Celtic Routes of West Wales and Ireland’s Ancient East.

Explore rugged coastlines, wild mountains, vibrant seaside villages and gorgeous towns. These routes are sure to spark your sense of adventure once again.

The Celtic Routes can be found across three Irish coastal communities, Wicklow, Wexford and Waterford.

They also have Welsh counterparts across the Irish Sea, Carmarthenshire, Ceredigion and Pembrokeshire.

Destinations on the Celtic Routes

The relationship between the two Celtic nations of Wales and Ireland have been established through centuries of shared history.

There are countless ancient myths and legends that have been passed down through the ages.

The kinship first began when Irish migrants who settled in Wales in the 5th century. They left their mark through the Ogham stones that line the Welsh coastline, even today. In return, Wales supposedly gave St Patrick to Ireland.

Celtic nations of Wales and Ireland

The Welsh and Irish counties of the Celtic Routes act as almost mirror images of each other from across the Irish Sea.

There are long, unspoilt beaches and lush rolling countryside framed by dramatic mountain ranges beyond. Many travel lovers are currently seeking destinations that offer a safe and socially distanced trip.

The Celtic Routes of Wales and Ireland offer space, solitude and scenery in abundance. They are the perfect place to seek meanigful experiences and more mindful travel.

You’ll learn what’s new in the travel industry on this show. There’s also travel hacks, destination inspiration and stories of travel adventures from around the world.

Here are 12 locations from across the gorgeous Celtic Routes. On these routes, you’ll discover the sights, sounds and stories that have shaped these beautiful parts of the world for millennia.

Wrap up warm for an autumnal walk at Llangrannog

This beach in Ceredigion is especially popular with families, as there’s plenty of facilities and places to eat nearby.

Between the two beaches is a large tooth-shaped rock known as Carreg Bica. Supposedly, this iconic rock once belonged in the mouth of a local giant. It’s one of the many Celtic legends across the Celtic Routes.

Overlooking the beach you’ll also find a statue of St Carannog. He’s a 6th-century saint who is thought to have founded Llangrannog.

Peak of the week – Pumlumon

Pumlumon, in Ceredigion, is a hikers dream. Meaning ‘Five Peaks’, Pumlumon is a ridge of peaks in the Cambrian Mountains. The highest peak in this area is Pen Pumlumon Fawr, at 752m.

Although it’s not the highest of Wales’ mountains, many people consider it the jewel in Wales’ crown.

That’s because, on a clear day at the summit, the whole of Wales unfolds before your eyes.

To the west, Snowdonia links to Preseli via the sweep of Cardigan Bay. Over to the east, the Berwyn and Aran range connects to the Brecon Beacons along the English border.

On a gloriously sunny day, it’s definitely one of the most Instagrammable places in Wales.

Unlike other tourist-heavy, hiking hotspots, there’s no queues, no crowds and no litter at Pumlumon, the most secret mountain in Wales. 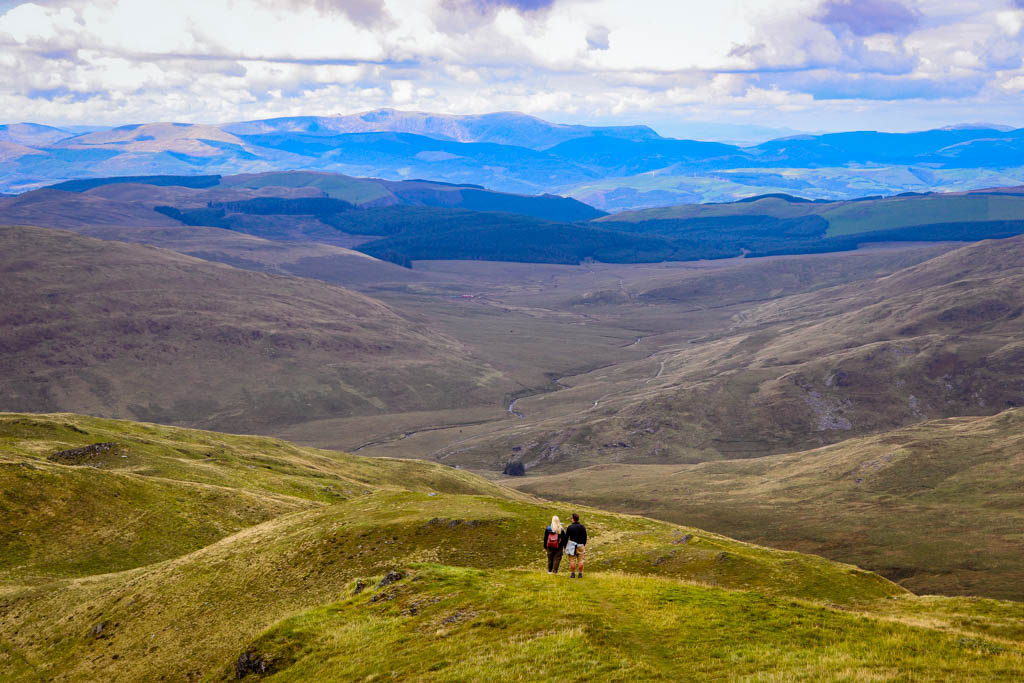 The westernmost peninsula of Pembrokeshire is home to the city and cathedral of St David’s. The resting place of Saint David, or ‘Dewi Sant’ in Welsh, the patron saint of Wales. This cathedral has stood as a beacon of holiness and pilgrimage for over 800 years.

Having survived the collapse of its tower, an earthquake and the Reformation, the cathedral continues to enthral its visitors.

Its size and scale dominate the beautiful coastal city of St Davids. This tiny city has a population of just 2,000 people.

Tackle some of the Pembrokeshire Coast Path

This scenic coast path twists and turns for 186 miles from St Dogmaels in the north, to Amroth in the south.

Stop at Strumble Head, near the town of Fishguard and within the Pembrokeshire Coast National Park, with its rocky and jagged headland jutting out of the coastline.

As well as being completely stunning, it boasts incredible wildlife. bottle-nose dolphins, grey seals and even orcas even been spotted here.

Make sure you come prepared for with a good pair of walking boots and a packed lunch if you are attempting a big walk.

Lace-up your walking boots and hike to Lyn y Fan

Although it’s a bit of an uphill climb to the lake itself, when you arrive you’ll be met with magical views in a captivating valley setting. It’s a perfect stop for a lovely Welsh picnic while trekking in the Brecon Beacons.

Step back in time at Aberglasney Gardens

One of the finest gardens you can visit in Wales is Aberglasney Gardens. A restored medieval house and gardens set in the Tywi valley.

The gardens made famous by the BBC TV series “A Garden Lost in Time” which documented its wonderful restoration.

Located in the Tywi Valley, near Llandeilo these glorious gardens are definitely worth a visit.

Spend the day exploring 10 acres of stunning grounds, from the twisted tree archway to the beautifully tended flowerbeds.

Have a whale of a time in Wexford Ireland

Back in the winter of 2010, there were reports of a number of Fin whales and a Humpbacks spotted off the coast at Hook Head in Wexford Ireland.

Rather thrillingly, the whales have made a welcome return every year. The Humpback has even become associated with this area of Ireland.

Head to the top of Hook Lighthouse and stand on its red balcony, an ideal viewing point with binoculars.

To raise your chances of seeing one of these beautiful creatures still further, you can even charter a whale-watching boat trip.

There’s no better time as November marks the beginning of whale watching season in Wexford.

Road trip around the Ring of Hook

If you’re short on time, this one-hour drive is the ideal way to take in the main sights along the long finger of the Hook Peninsula in Wexford.

Around every other bend on the Ring of Hook is a quiet beach, a crumbling fortress, a stately abbey or an acclaimed seafood restaurant.

The popular beach of Kilfarrasy in Waterford is sheltered by cliffs that are thought to be around 460 million years old.

The unusual rock formations and rock islands on both sides of the beach attract a lot of attention from geologists and rock poolers alike. It’s also a great spot for some coastal foraging in Ireland.

Unwind in the peaceful village Ardmore

Beautiful Ardmore, an ancient fishing village in Waterford, has history in abundance.

Visit this historic village and you’ll be transported back as far as the 5th century. Its monastery is Ireland’s oldest Christian settlement and was founded by St Declan.

You’ll also find an 8th-century oratory and a 12th-century 29m-high round tower, which served as a belfry and place of refuge.

Make sure you find time for the 4km cliff walk that starts and ends in the village, where you’ll pass St Declan’s Well.

This well is where pilgrims have paid tribute for hundreds of years on the 24th July, the Saint’s feast day.

The ruins of the Black Castle stand on a rocky headland looking out across Wicklow town and the North Wicklow coast in Ireland.

Built around 1176 following the Norman invasions, Black Castle is a location with a turbulent history. It was consistently under frequent attack from the local chieftains.

It was burned down in both 1295 and 1315, but the castle managed to survive until around 1645, when it was attacked again and eventually demolished.

Its haunting ruins are framed magnificently by the surrounding coastline and the Irish Sea.

Lough Tay is one of the most iconic and most photographed locations in Ireland.

In the heart of the Wicklow Mountains, in the bottom of a spectacular glacial valley, is a lake that resembles Ireland’s greatest export – Guinness.

Its dark, peaty water, combined with an oval shape and white-sand beach make Lough Tay look rather like a huge pint of Guinness.

The lake is part of the Luggala estate, owned for many years by, you’ve guessed it, the Guinness family.

They had the white sand imported to give the lake its distinctive look. So Lough Tay is also known as the ‘Guinness Lake’.

What are the Celtic routes?

A cross-Irish Sea set of collaborative counties in Ireland and Wales has formed a partnership to deliver a new tourism heritage project known as the ‘Celtic Routes’.

This partnership aims to bring Celtic culture, spirit and soul to a new audience.

The relationship between the two Celtic nations has been established on the basis of an unbreakable bond formed through their shared heritage of untamed landscapes, ancient crosses, chapel ruins and sacred stones.

Irish migrants who settled in Wales in the 5th century left their mark through the Ogham stones that still line the Welsh coastline today. And in return, Wales gave St Patrick to Ireland – or so they say.

The Celtic Routes aim to showcase this primal relationship to new eyes and ears.

Visitors can discover untamed nature and roads less travelled, that still follow the pulse of the changing seasons and rhythms of the natural world.

And where legends of saints, giants and princes will transport visitors to whole new worlds.

How do I get to the Celtic Routes?

Road – Your Celtic Routes adventure is accessible by car, driving along the coast of Carmarthenshire, Pembrokeshire and Ceredigion before crossing to Ireland.

Sea – After exploring Wales’ Celtic Routes offering, you can catch a ferry from Fishguard in Wales to Rosslare in Ireland. And vice versa.

Air – Fly direct from Cardiff, Bristol or London airports to Dublin from which you can hire a car and drive south to Wicklow, Wexford and Waterford.

Thanks to Celtic Routes for partnering with me for this content. To start planning your trip across the Celtic Routes, go to celticroutes.info for more information and inspiration.

Get Pip a coffee!

Pip is a massive fan of vanilla lattes and would be totally stoked if you got her a coffee so that she can keep creating awesome travel content for you!

Flights: To search for flight deals check out sites such as Skyscanner, Kayak and Travel Supermarket to compare the costs of flights. My top tip to save money is to fly mid-week and take just hand luggage if possible.

Accommodation: I love a nice boutique hotel on my travel and I regularly use Booking.com as they have fantastic flexibility and cancellation. I also recommend Trip Advisor and hotels combined for hotel browsing. Additionally, I use Airbnb and TrustedHousesitters for homestays.

Group Tours: I love booking group tours as a cost-effective and convenient way of discovering destinations. I recommend booking a small group tour with G Adventures.